OPINION: On-line Learning Is a Travesty for Most Students

Sunday’s Daily News reported in its California “Coronovirus Daily Tracker” that from 0-17 years of age, the number of deaths in the state of California has been 2 and the reported number of cases 11 percent. Ages 18-49 have accounted for seven percent of the deaths and 60 percent of the cases. Ages 65 and over: 74 percent of all deaths (12,306) of the 16,904 reported here.

I don’t believe in conspiracy theories. But if I did, my number one choice would be the premise that on-line learning is an effective method of teaching for the poor, immigrants and those living in the inner-cities and on reservations—and most kids in general.

As long as we can keep kids from learning (and exercising), then conspiracists might say we can keep them “fat, dumb and happy.”

If I still had children in public schools, all three of them would now be staying with relatives in areas of the country where schools are open.

I’ve heard that a few parents in Pacific Palisades have adopted this attitude and have relocated to states or other areas of California where schools are open.

Many of those who are still here have hired tutors or have banded with other parents to form their own pod schools.

Who suffers from this pandemic shutdown? The poor, those families that have more than two children and those who are still trying to get Wi-Fi to go with a computer/laptop for each child.

An October 13 L.A. Times story (“As Demand Grows for Tutors, Volunteers Step into Fill the Gaps,”) noted that “This tutor-for-hire frenzy highlights concerns about how the pandemic could further widen the education divide.

“‘We are going to have an exacerbation of massive inequality,’ said Prudence l. Carter, dean of UC Berkeley’s Graduate School of Education. ‘And many children from economically vulnerable backgrounds who need access to tutors will very likely not get that support.’”

About 80 percent of the 460,000 students in LAUSD are from low-income families.

One mother I know has three children in third, fifth and seventh grade. That means she needs three devices (and Wi-Fi) for her kids to be able to attend school.

She works from home, and recently received a note from the third-grade teacher that her daughter was spending hours on Prodigy (a math program), but no time had been spent on the reading program and the kid was failing.

Grandma stepped in and helped the girl read through the story, but then the homework was to write two paragraphs. I asked the girl’s brother how many sentences needed to be in two paragraphs and was told four in each paragraph—which meant the third grader needed to write an eight-sentence story on her own.

As the mom pointed out, no one has taught any of her kids keyboarding skills, so they don’t know how to type. What might take me a few minutes, could take a third grader an hour.

I spoke to a teacher in a lower income school, who told me that three weeks after school had started, her last student finally received a device.

That teacher said she had given reading tests to her second-grade students and learned “who the best readers in the family were,” which often were the adults. There was no way to tell about the students.

The teacher also said one student told her he couldn’t do a project because his father had taken the device. When she reported this at a teacher meeting, she was told by the kid’s previous teacher that there was no father in the home. Who is monitoring learning at this home?

Yet another two-bedroom home had three kids around a kitchen table with devices. They were trying to learn, but the noise level of three different teachers giving lessons so close together was totally confusing. This might come as a surprise to some, but three or four kids often share a bedroom, and the kitchen table becomes an ad hoc classroom. 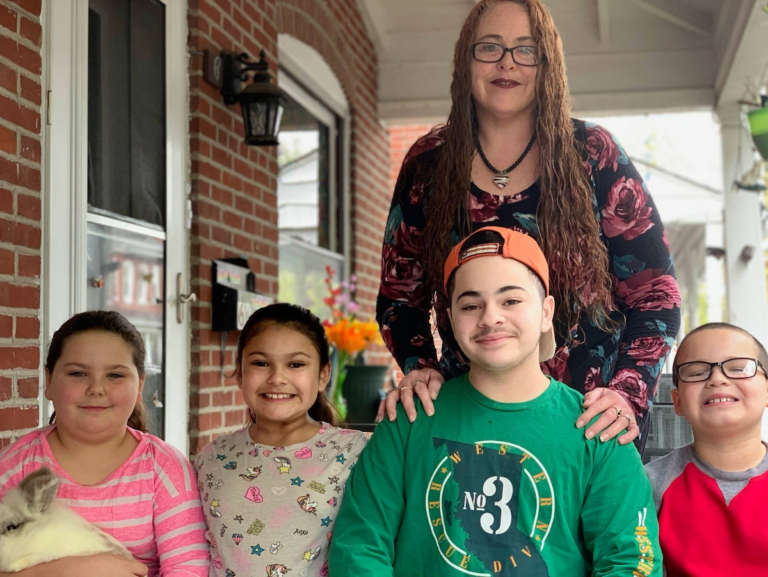 Left to right: Katelynn, 9, Angela, 9, Christian, 13, David, 8. Angela Kearney, 50, stands behind them on the porch of her Pottstown home. (Courtesy of Cathryn Kearney for NPR)

I still have found no science to support that virtual learning works (though I realize the situation has been forced upon us by Covid-19 restrictions in L.A. County).

My sister lives in Los Alamitos and is lucky. “I have an eighth grader and one in high school,” she said, “and they understand the concept of working on a computer and are better at staying on task then those in younger grades.” Her school district was one of the first in Orange County to reopen on September 8, with a hybrid schedule.

Here in the Palisades, one public teacher is still trying to decide whether to use Schoology or Google Classroom with her virtual platform. Tell me those students won’t be behind the grade level of the middle-school students in Wyoming, who are attending class in person.

A local mom told me that she spoke to a teacher after she knew her son had made some errors on a paper and had weighed whether she should correct them before he submitted his paper via the computer.

She then decided with her conscience that if her son was in the classroom, she wouldn’t be able to make the changes, so she had her son press “send.”

Yes, there were many mistakes, the teacher told her, and yes, many of the kids had perfect papers, but he suspects that many students might have had assistance. The teacher has no way to tell how many of his students are receiving extra help from mom/dad/tutors.

And in our inner cities and on reservations? Last April, L.A. Unified said it had not connected with four out of 10 elementary students.

An August 31 CBS report (“LAUSD Virtual Attendance Dips as School Year Gets Underway”) noted that about four percent of all students and their families had not made any connection with a school community.

Governor Newsom has four children (ages 4 to 10) and he certainly could afford to hire a teacher for each of his children.

He has been sued to reopen schools for in-person learning. A lawsuit was filed in United States District Court (Central District of California Western Division), July 21, 2020 that was backed by the Center for American Liberty.

The state responded on August 17, noting that parents are relying on “inaccurate and outdated beliefs” that school-age children do not spread Covid-19.”

The parents’ lawyers responded: “The public has no interest in keeping schools closed this fall because in-person learning does not meaningfully increase the risk of spreading Covid-19.”

On August 14, ABC reported on a second lawsuit filed (“Coronvirus: SoCal Parents Sue Gov. Gavin Newsom over School Closure Order”) and quoted Rancho Palos Verdes father Matthew Brach, who’s also on the local school board. “Students who are already disadvantaged are being adversely affected by this order, and I feel a personal responsibility to make sure that we get this one chance at a guaranteed education.

“‘The negative effects of keeping schools closed far outweigh the risks of opening them,’ said Jesse Petrilla, a father of two boys and a plaintiff, who noted that the ‘affluent’ and ‘working class’ are affected differently by mandated remote learning.”

In Shasta County, a lawsuit against the closures was filed on September 10, maintaining that the governor violated the state Constitution’s “separation of powers” clause by ordering restrictions on schools.

On September 24, (“Parents Sue over Distance Learning in Los Angeles”), an AP story said that nine parents had filed a lawsuit against the LAUSD’s distance learning program, arguing that it fails to meet state educational standards and disproportionately harms Black and Latino students.

“They contend the district is failing to engage their children online at the same rate as other large California school districts and that state-mandated instructional minutes often lack actual instruction with teachers dismissing kids after checking they turned in their work,” said the AP. “Some parents said they’re still unable to connect to the district’s online platform and that teachers sometimes end classes early without going over new material.”

Why doesn’t Newsom open up schools?

He follows the California Teachers Association, which donated more than $1.3 million for his last campaign (Sacramento Bee, February 10, 2019, “Here’s Who Invested in Gavin Newsom – What They Want Him to Do.”)

What do teachers want? According to the California Teachers Association’s website, “Educators must continue to be part of the conversations, including how and when schools physically reopen and implement robust distance learning.”

It notes that “Schools will need appropriate cleaning and sanitization, as well as safety supplies and training to prevent the spread of the virus on school campuses and transportation systems.”

The CTA also ask for lawmakers to address the state’s revenue shortfalls. “Among the options they should consider are suspending tax credits and exemptions, taxing the state’s wealthiest billionaires, placing a temporary tax on wealthy corporations, and supporting Proposition 15, the Schools & Communities First initiative, on the November ballot.”

Although grocery workers, postal employees, doctors and nurses have been having face-to-face interaction since the onset of Covid-19 and are considered essential, teaching is not.

Typical two-bedroom, one bathroom home on the Rosebud Reservation.

According to my conspiracy theory, this is exactly right.

Let’s keep a “pretend” system of education in place for lower income families, while the wealthy in Los Angeles hire tutors and form learning pods to make sure their kids’ education is not undermined.

This entry was posted in Schools. Bookmark the permalink.

2 Responses to OPINION: On-line Learning Is a Travesty for Most Students